We had so much fun doing the Monday-to-Friday mini-vacation to Zeeland Province after my birthday in June, we decided to do it again after Astrid's birthday in August...but this time to a different province:  Friesland.

Left:  See Zeeland way at the bottom-left?  Friesland is at the top-left, way to the north.
There are 12 provinces in the Netherlands, so talk about the opposite ends of the country!
Right:  See the red arrow pointing to Bolsward in Friesland?  That was our home base. 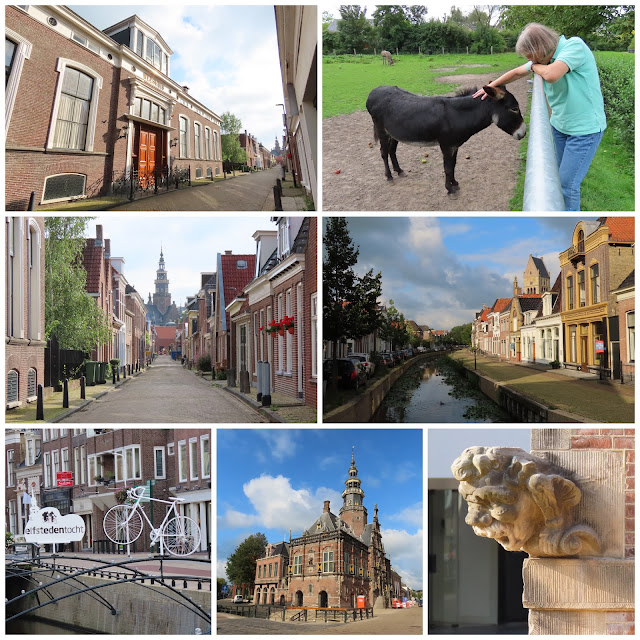 As I said on FB, back in 2013 Astrid and I attended a Christmas concert at the Martinikerk
(1446, center-right) in Bolsward, a block from our hotel (top-left) which used to be an orphanage.
We saw everything again as though for the first time.  Our hotel, with 14 rooms, even had 2 donkeys in
the back yard!  The other building, with the spire (center-left and bottom), is the city hall,
at the opposite end of our street.
[Note the Elfstedentocht sign and bike (bottom-left).  It's longer than this but when there was ice on the canals, the 11-city skating race included Bolsward.  Now it's part of the 11-day bike tour.] 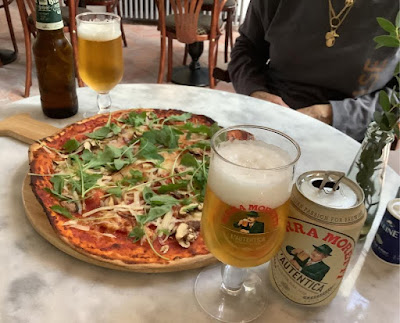 As a btw, every evening we ate what our hotel served: a stone-oven-made pizza we shared and a beer.
They're part of the Elfstedentocht bike tour each year and serve this to the bikers. :)
[Astrid's photo.]
Day 1, Monday, August 30: Lelystad and Lemmer 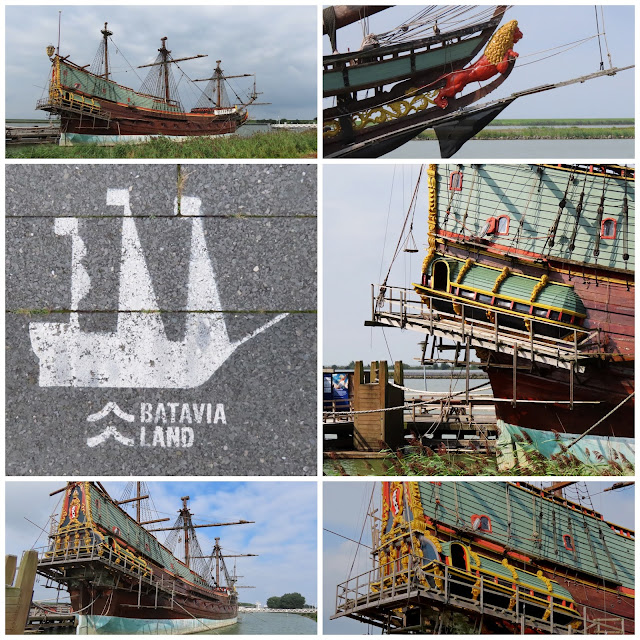 The province in between where we live (South Holland) and Friesland is Flevoland.
We stopped there in Lelystad to see the Batavia ship from 1628 which has a long and sordid history. 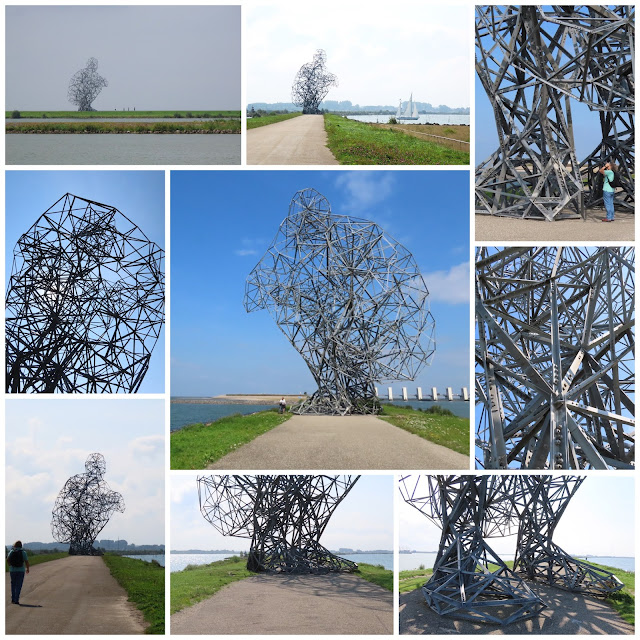 Across the canal we were able to see Antony Gormley's "Exposure" sculpture from afar (top-left),
before driving around to see it up close and personal.
Astrid had researched it beforehand and knew it'd be a highlight of our trip.  It was! 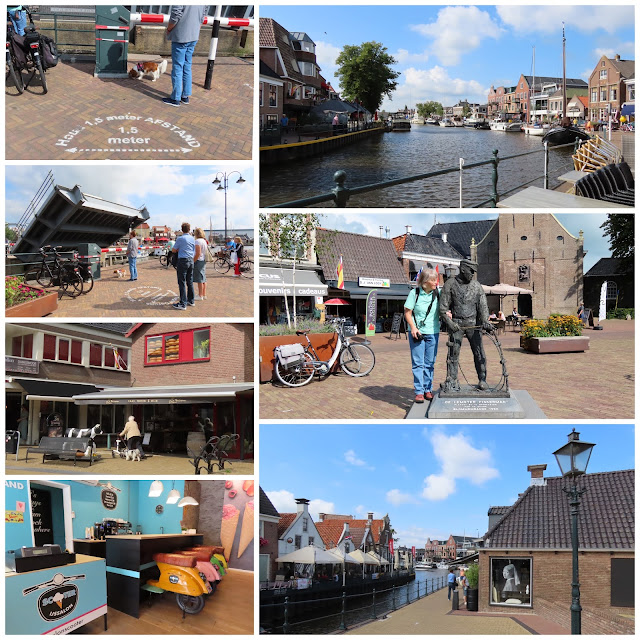 Once we drove into Friesland, we stopped at Lemmer to eat lunch.
We were last there in February, 2011, while celebrating our first wedding anniversary!
Day 2, Tuesday, August 31:  Makkum, Workum, Hindeloopen, Stavoren 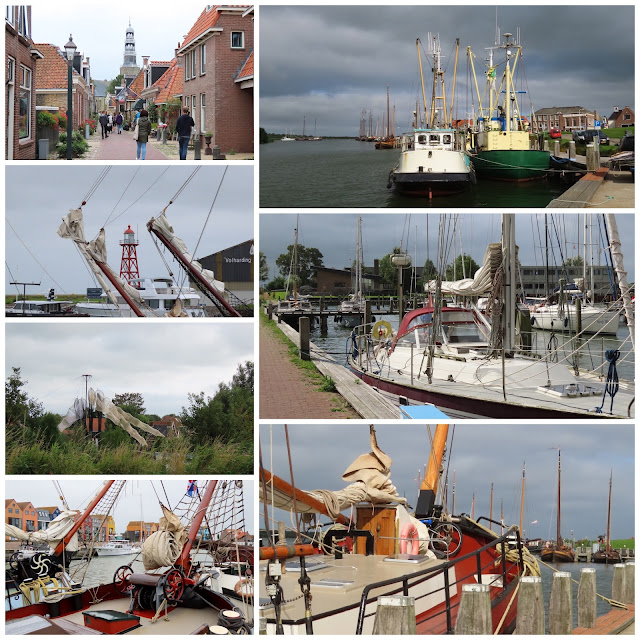 This collage sums up the day of visiting 4 cities along the southwestern Frisian coast.
They all mesh together after a while but are wonderful to see!
I especially liked the colored houses of Stavoren, bottom-left. 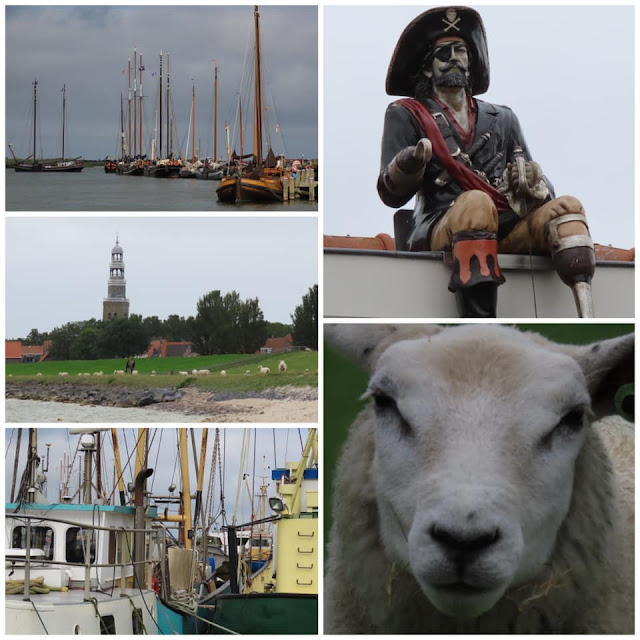 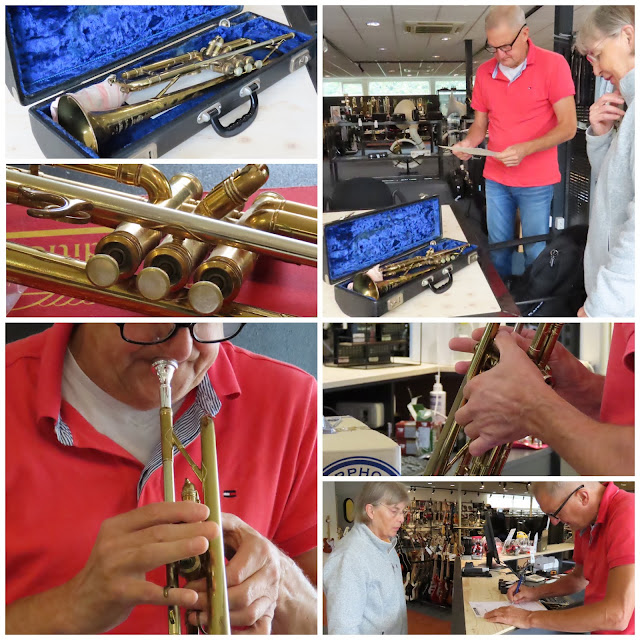 Ahead of time, Astrid had scheduled an appointment to sell her dad's solo trumpet
at one of the largest music stores in the Netherlands, not far from Bolsward.
The owner spent quality time looking it over and giving her a deal that was like a windfall!
There's apparently a market for vintage French trumpets like this, also played by Louis Armstrong. 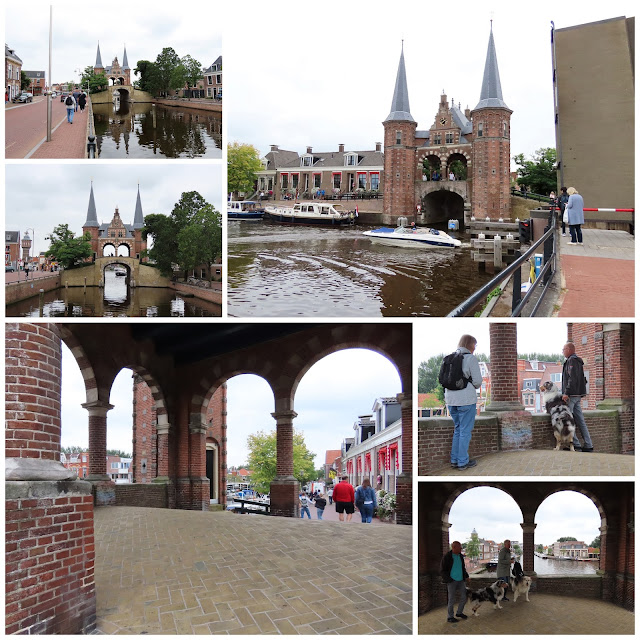 From that happy experience, we drove back, stopping in Sneek for lunch and a walk-about,
remembering it well (from that same anniversary trip in 2011), because of their landmark Waterpoort. 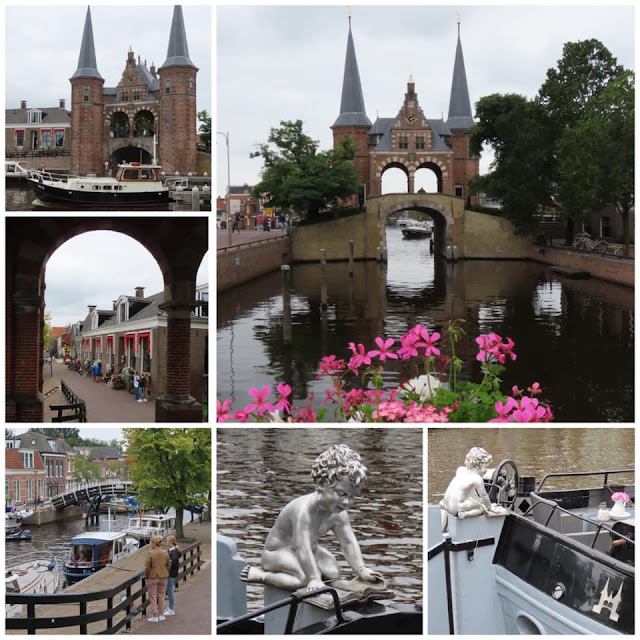 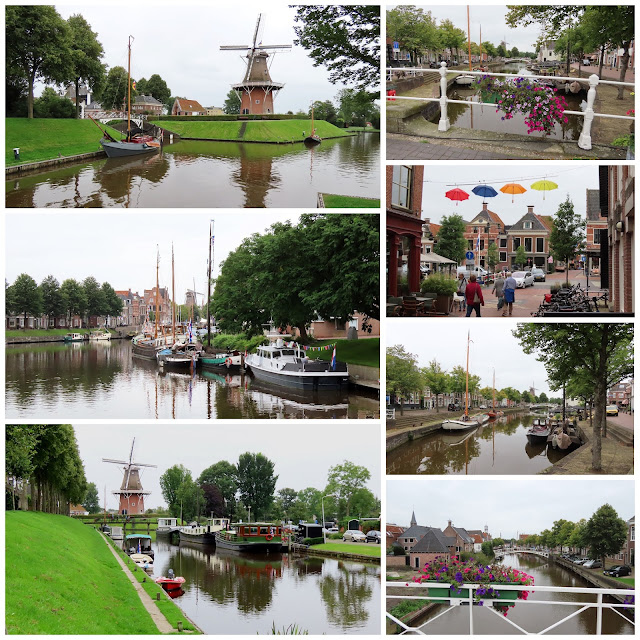 Whenever we mentioned that we were going to Friesland, invariably someone would say "Dokkum,"
as in make sure we go there.  So we did.  What a lovely, quaint, Dutch town!
It happens to be the 5th most popular shopping city in Friesland.  HA! 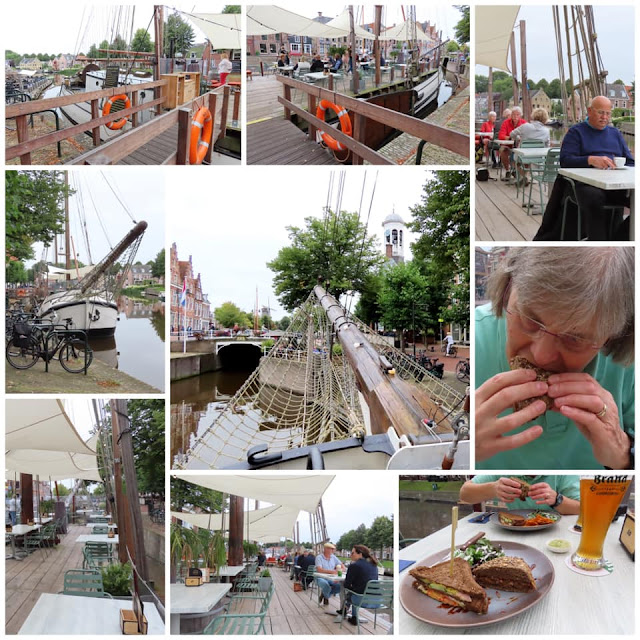 But all we did was walk around and eat lunch on this delightful, docked De Tromp ship.
These are the memories we'd rather make in our traveling Life. 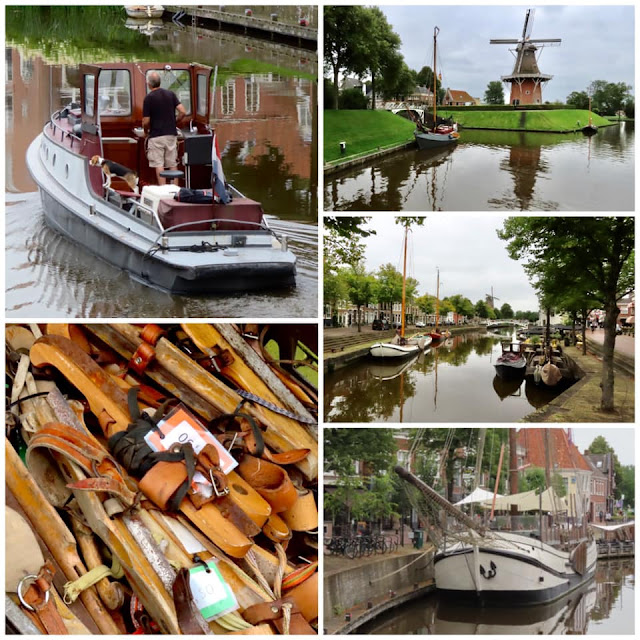 [Astrid's collage.]
Dokkum is best known historically, however, for the martyrdom of missionary St. Boniface in 754,
which is why after lunch we drove to Leeuwarden to visit the St. Boniface Church. 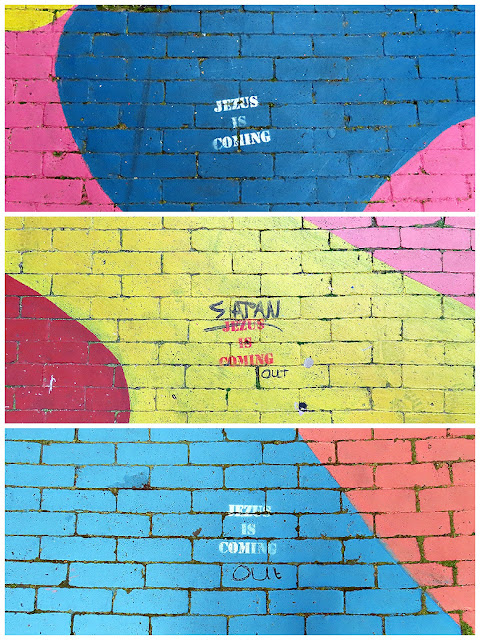 Once in Leeuwarden, the capital of Friesland, we walked to the church on this sidewalk.
Social commentary can be found almost anywhere/everywhere these days! 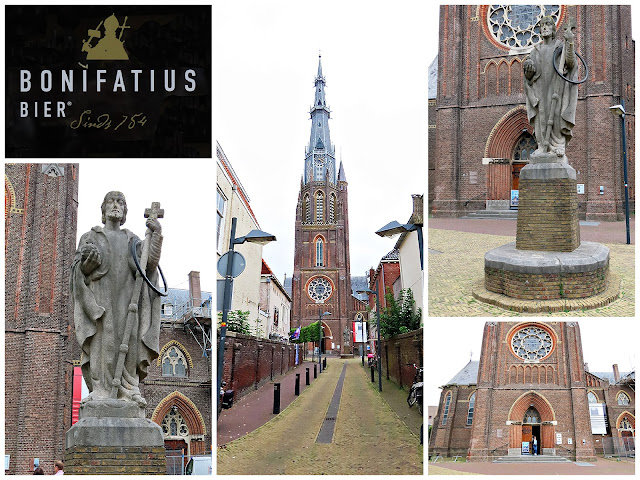 The St. Boniface Church, from 1882, is Roman Catholic.
The Boniface beer is brewed in Dokkum, so, yes, there's a connection.
Day 5, Friday, September 3:  Urk 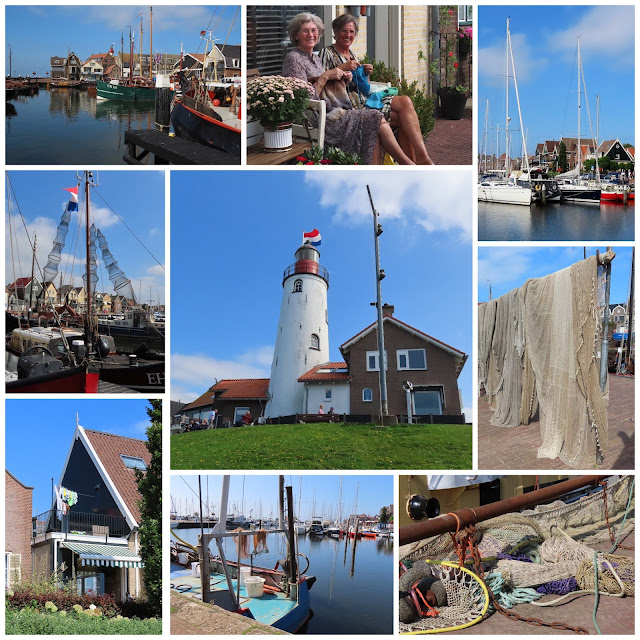 As with our Zeeland trip, we wanted to find the perfect city to visit on our way home.
And because we had to drive through Flevoland province again, we both agreed to Urk.
OMG!  It couldn't have been a better place to end our mini-vacation!
It also was the only sunny day we had all week. 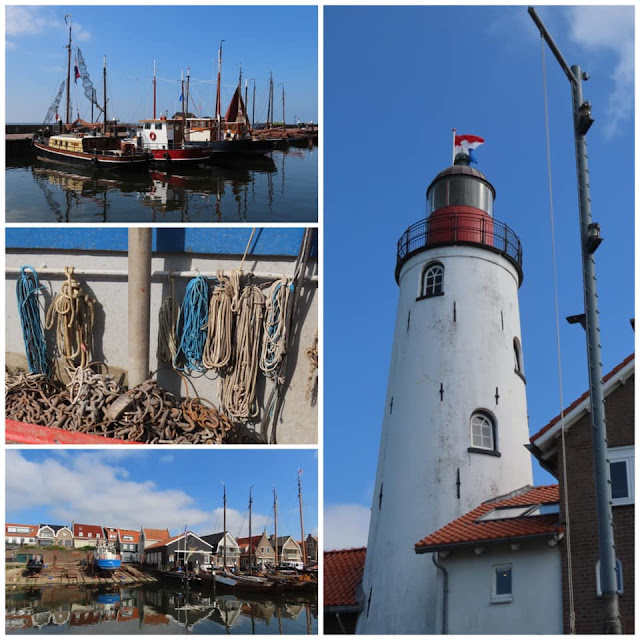 [Astrid's collage.]
This second mini-vacation, Monday-to-Friday, was so perfect in every way that we're already talking about what province we want to tackle next.  We're familiar with North and South Holland, in our neck of the woods, so that leaves 8 provinces to go of the 12.  At maybe 2-3 a year, we should check them off fairly quickly...and then work on going back to some for places we missed.
♥ ♥ ♥ ♥ ♥
[Note to self:  August was the first month since January of 2005, when I started this blog, that I posted absolutely nothing, niks, nada, zero, zilch.  I suppose that has more to do with the pandemic than, um, just slowing down??]
at September 09, 2021

Almost 3 months after the last mutsjes /little hats' post from  July 23 , here's the new batch from both of us!   First, from Astr... 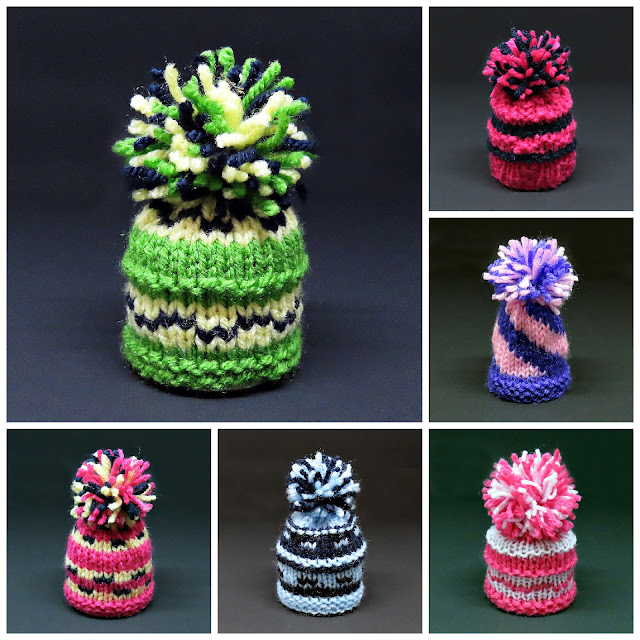 Ginnie
Gorinchem, South Holland, Netherlands
Over time, if we shoot authentically, follow the leanings of our heart, our body of work will become a silent testimony to who we are and what we care about. (Jan Phillips). And so it is that as you follow my journey here, you will be "in soul" with what makes me tick.

My Vision and Verb Posts 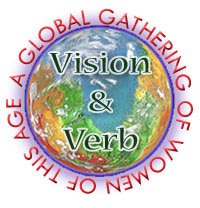 My Vision and Verb Book 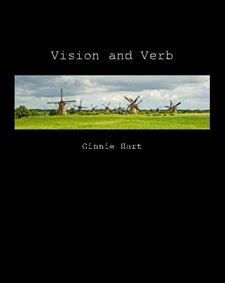 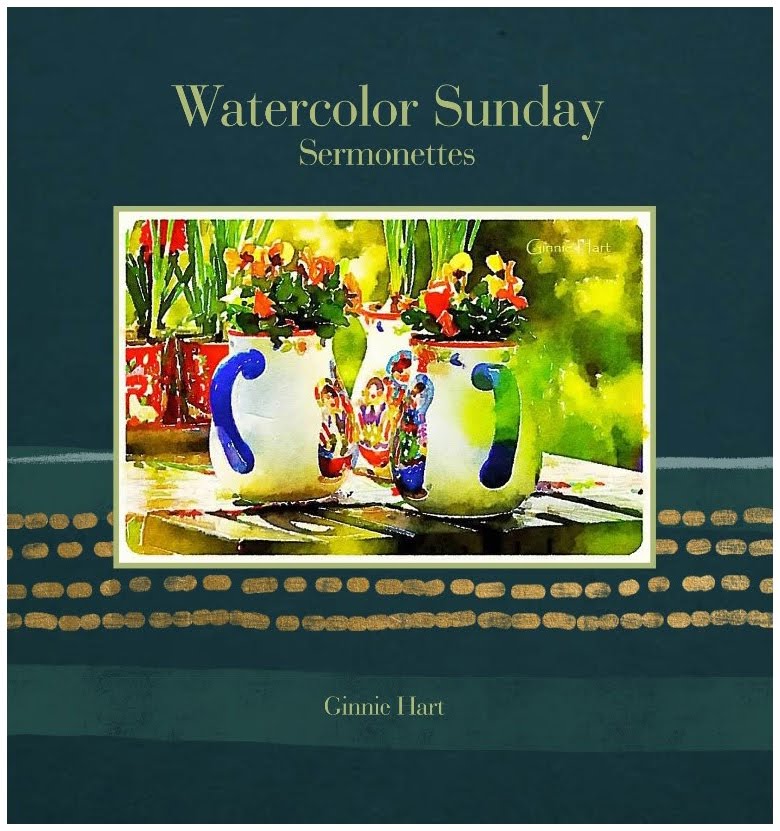 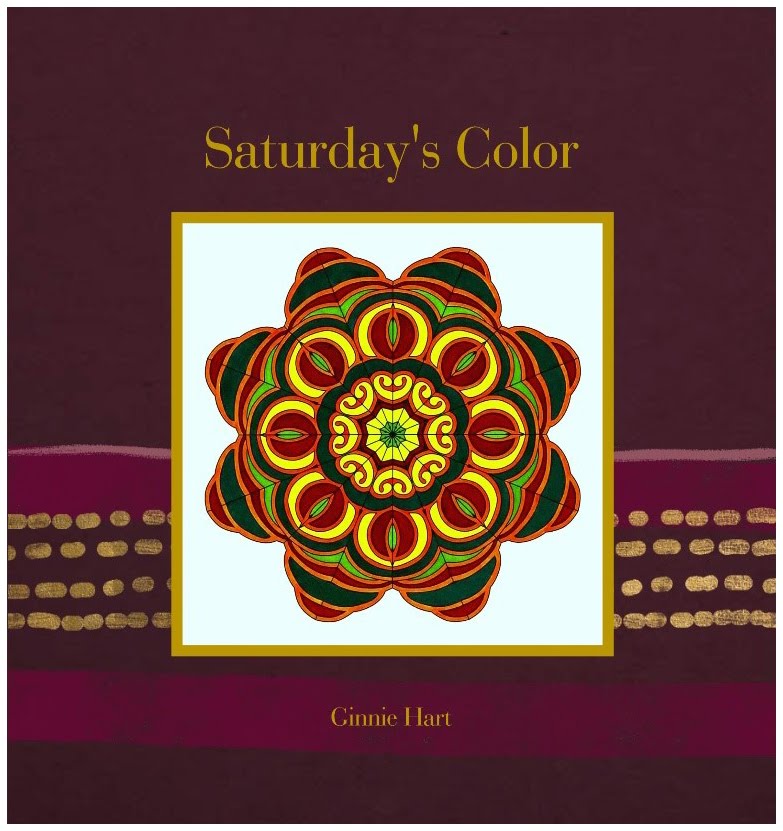 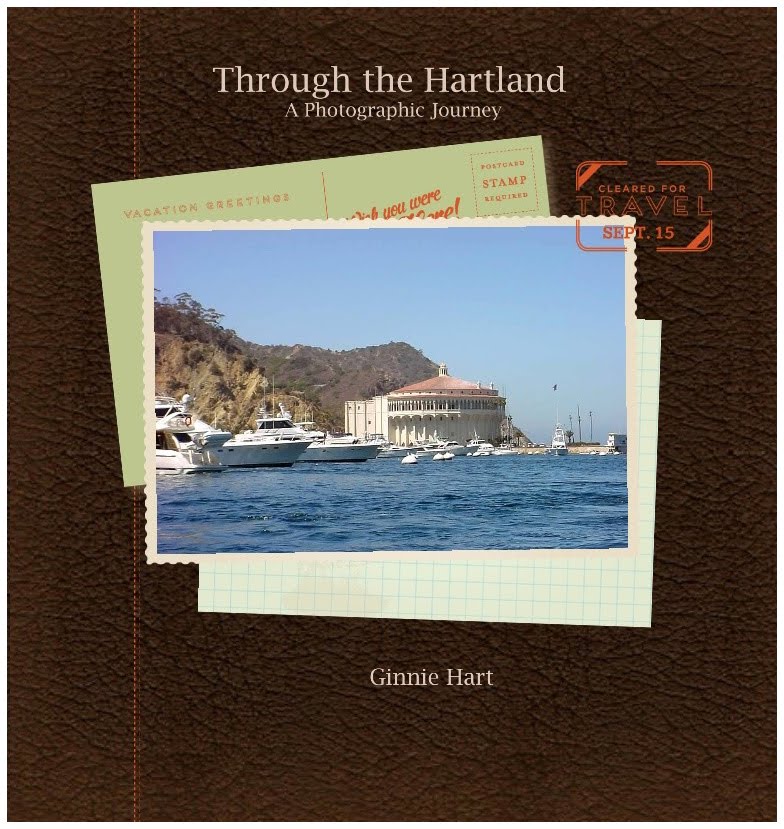 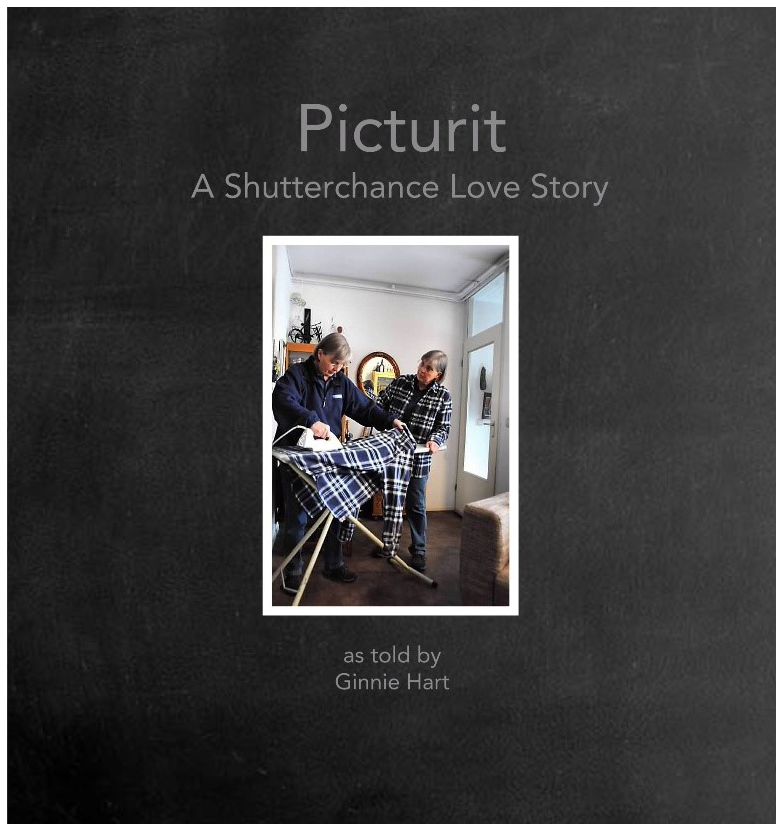 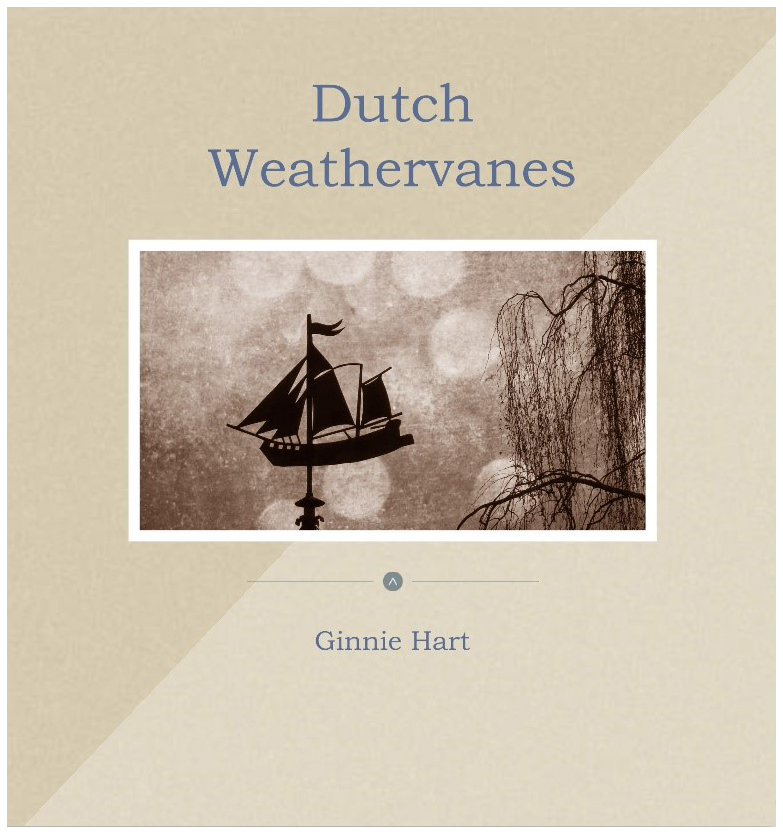 Nicholas in the Netherlands 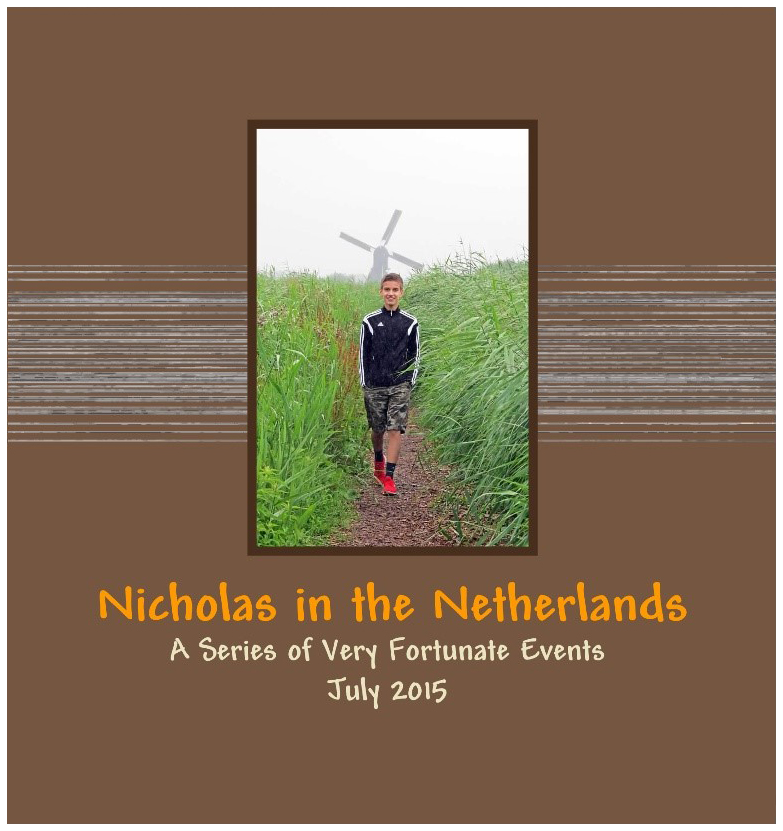 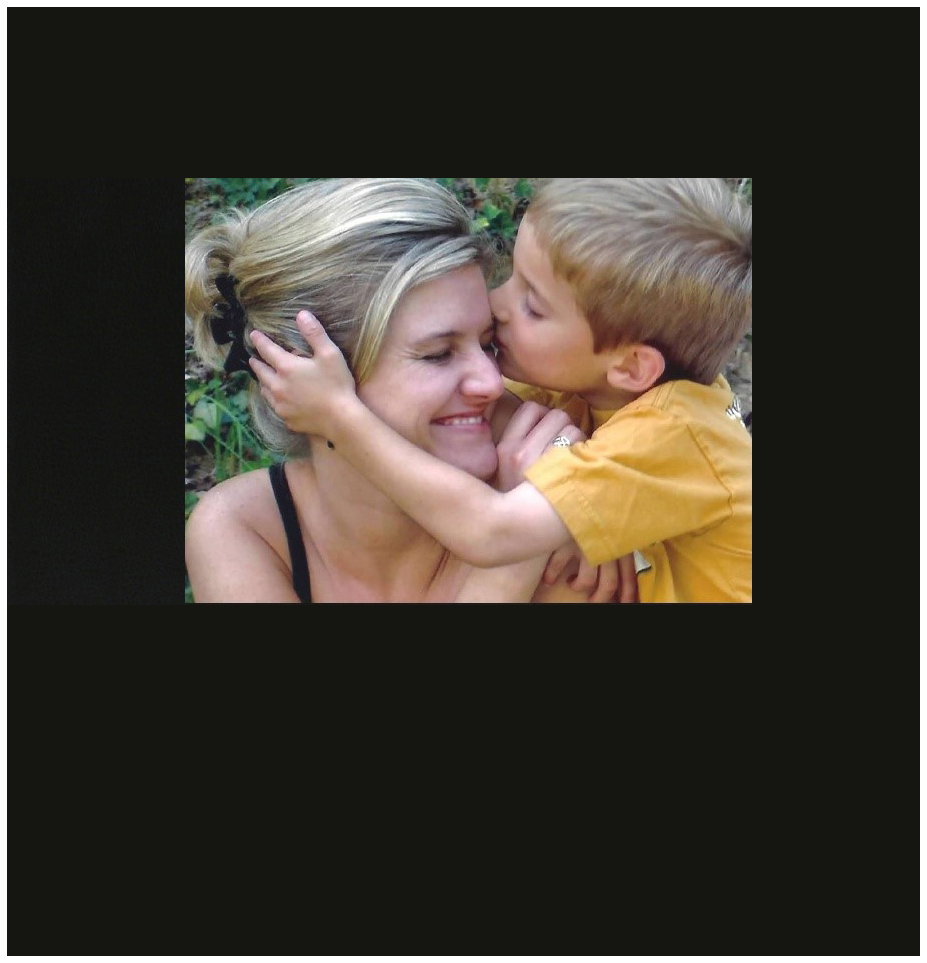 Holland Through My Lens 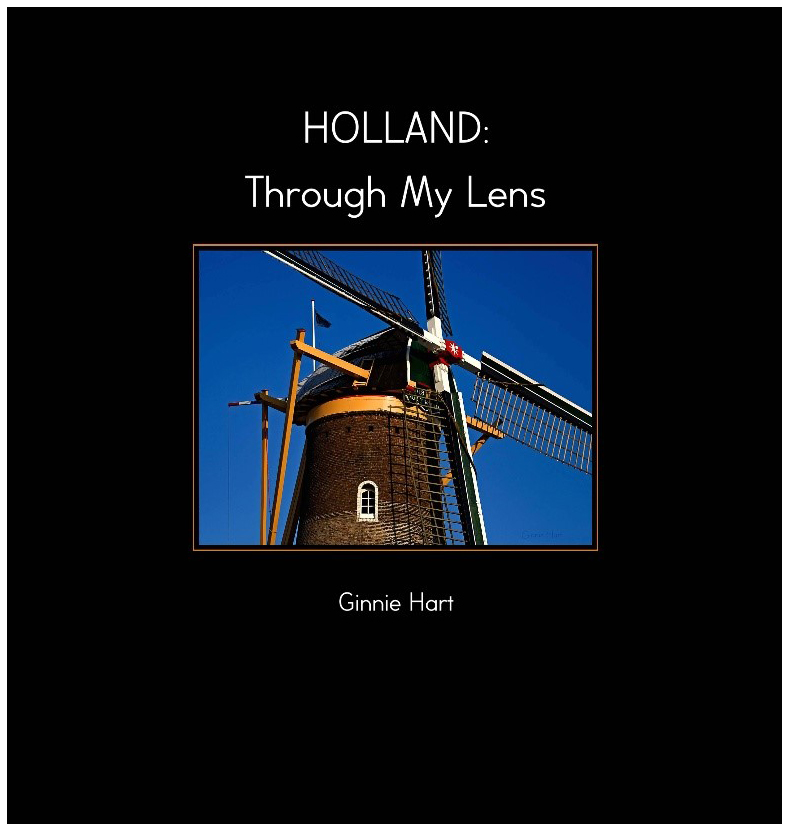